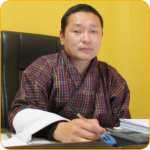 Realizing the need to develop competency in hydropower construction by Bhutanese company, the mandate to enter into hydropower construction has been entrusted to Construction Development Corporation Limited by the Royal Government of Bhutan and Druk Holding and Investments Limited (DHI). Subsequently, a dedicated Department for Hydropower Services was established in September 2015 with the approval of Board. The detail Business Plan of Hydropower was drawn to construct hydropower projects which was approved in 32nd Board meeting. With the approval of Business Plan, the CDCL has left no stone unturned for resources mobilization, recruitment of employees, purchase of equipment and developing the skills. The first task was awarded by Druk Green Power Corporation in Nyera Amari integrated hydropower project in March 2016 to excavate the exploratory drifts. The company has meanwhile continued to prepare for the bigger project targeting Kholongchhu and Nikachhu Hydroelectric Power Projects. While CDCL waits for confirmation of the Kholongchhu HEP to kick off where it will be allotted about 20% of total length of Head Race Tunnel (HRT) on a nomination basis, much work has been done to secure works from other ongoing hydropower project works. The first major entry of CDCL in the hydropower project construction is in the Nikachhu Hydroelectric Power Project. The work is awarded by Hindustan Construction Company as subcontract. The scope of work includes excavation and lining of about 3 km HRT from adit-IV. The excavation of adit is about 700m. It was on 9 June 2017, the first breakthrough was made by a Bhutanese company where CDCL had the honour of having Hon’ble Prime Minister as Chief Guest, Hon’ble Minister of Education, Dasho Chhewang Rinzin (Chairman of CDCL Board & MD of DGPC), Dasho Yeshi Wangdi (Secretary of MoEA) and many other senior government officials. The construction is manned by Bhutanese and is executing in two shifts system. Although it is a mammoth task to undertake such collosal work for the first time, with the continuous support received from all relevant authorities, the project is intended to compete by April 2020.